Rent either jointly or separately

“Las Gachas” holiday cottage is a complex made up of two cottages: “El Señorito” and “El Labrador”. Both houses can be rented either jointly or separately, as they are fully equipped with everything you need for visitors to enjoy and relax.

Baptisms, weddings, communions, birthdays, business lunches, farewells, recordings, etc. Celebrate any event in the "Las Gachas" complex and enjoy it to the fullest.

The water in the pool comes from a birth next to it. Bathing in this water will be an unforgettable sensation.

Transfer of clients from the nearest airports (Almería, Granada, Murcia and Alicante), both on arrival and departure. (Check prices)

Personalized service according to the client's needs. (Check prices)

Direct access to the cottage by the main door.

Closed parking just at the door of the cottage, under the shade of a hundred-year-old pine tree.

Spectacular views from the porch and terraces.

Free Wi-Fi throughout the cottage.

Air conditioning hot/cold in all rooms. Big fireplace in the livings room.

The cottage has a toaster, microwave, washing machine and refrigerator.

Enjoy a relaxing bath in a pool with natural water from a nearby birth.

Two stone barbecues will delight lovers of meat, one next to the pool and another next to the cottage.

Your pets also deserve a vacation!

The cottage is adapted to disabled people, except the first floor (suite)

You can make the payment by credit card 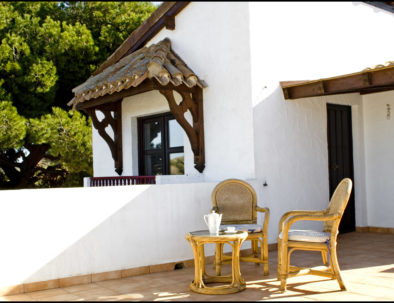 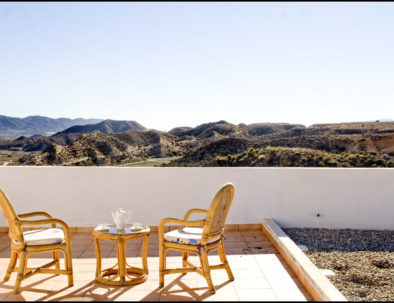 Bed and bath linen. Cleaning prior to the arrival. Bed and bath linen is changed once a week. Light and water. Under no circumstances shall a greater number of persons be admitted than that for which the accommodation is prepared, and the owner reserves the right to refuse admission and to order the guest to leave.

Do you want to make a booking?
Book now

ENJOY, EXPLORE AND HAVE FUN

The cottage “Las Gachas” gives you the opportunity to immerse in the XIX century and offers a fascinating glimpse into rural life of yesteryear, imagining the diverse rural labours such as the mowing, the ploughing, and the harvest of crops. This nice old cottage is set in an isolated semi-arid spot, of broad horizons, rolling hills, watercourses, gullies, mountains and ravines. It is an amazing landscape to explore. Las Gachas cottage is an old cottage of the XIX century where we can distinguish two houses, a broader and larger one , “El Señorito” where we stayed long periods of time especially at the time of harvesting and “Los Labradores” where a family in charge of the farming work and farm maintenance lived. Both houses constitute the same architectural complex. During this time, the region of Cuevas de Almanzora experienced a great boom due to the great profits obtained from the mining in Sierra Almagrera. In fact, the former owners were shareholders of several mines and they used theses profits in order to buy and repair some rural areas. Las Gachas cottage has been rehabilitated trying to keep the architecture, building style, design and decoration. The aim of all this is to recreate the boom times and try that the guests can life this experience of ancient times. A few years ago the restoration of Las Gaschas cottage began, but it was not until the year 2013 when the cottage has been fully completed. All this has not had an influence on the way the owners have restored it. They do not forget the times in which we are living, so they have included this lifestyle with the comforts of the XXI century to make our guests feel at home.

DO YOU HAVE ANY QUESTION?